The 2014 CHILL Series kicked off last weekend with the CHILL Jnr Big Mtn Champs at Craigieburn Valley. After the recent snow storm Craigieburn had good snow cover and some powder, making for awesome conditions for the comp. 25 talented skiers from Canterbury and the Southern Lakes had two runs throughout Saturday the 16th of August. Topped off with great weather, the competition was enjoyed by all.

“We ran the event in the ‘second t fourth gut’, a centre piece of the ski area.  This provided a diverse selection of skiing lines for young big mountain skiers.  By the time the competition started, the freezing levels rose enough for the snow pack to soften up creating good conditions for everyone,” explained Stu Waddel, Event Director.

Taane Bayce-Horseley from Wanaka took out the first place in the 10 and under male division. He amazed the judges with his clean line and he knew exactly what he was up to. Luca Harrington came second and Micah Cousins third.

Wanaka skier Manu Barnard scored gold in the 14 and under male category. He impressed the judges with an awesome first line and decent cliff drops, backing it up with a pretty nice second run utilizing different features. Alistair Garland came second with a cool double drop and overall solid skiing and Max Watt came third.

The female division saw a strong field coming through and the level of skiing was simply great to watch. The 14 and under female division was won by reigning winner Phoebe Young. After taking out the first place in 2013 she showed a great choice of line, just and aggressive skiing. Reanna Shepherd skied very well too and took out the second place followed by Megan Blackley.

In the category 16 and under Matthew Sweet from Wanaka skied a cool line in his second run which convinced the judges. The silver medal went to Alex Young. In the same category Noah Regan Roach came up with a great choice of line and skied well. He showed a lot of potential but a crash cost him valuable points.

A special thanks goes to the parents and coaches of the competitors, the judges Ollie Hunt and Jamesa Hampton, as well as to Craigieburn Valley Ski Club for hosting the event and Smith Optics for sponsoring the event. 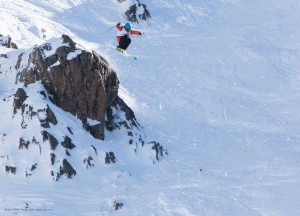