Fresh off last weekend's halfpipe World Cup extravaganza in Park City, UT the world's best freestyle snowboarders are descending on Boston to take over one of America's most iconic baseball venues as the U.S. Grand Prix will break new ground in 2016 when it presents the Polartec Big Air at Fenway on February 11th, 2016.

The gigantic scaffolding ramp for this season's first big air World Cup is situated in the centre of Boston’s Fenway Park. Never before has the U.S. Grand Prix featured a big air-only event which will actually be the third ever big air World Cup in the US since Mt. Bachelor, OR (2004) and Denver (2011).

The scaffolding drop in at Fenway will reach a height of 140 feet – taller than the stadium lights and nearly four times the height of the famed Green Monster at the 104-year-old venue.

The Fenway Park will play host to one of the deepest and strongest fields ever seen to perform at an in-city big air event led by Sochi slopestyle gold medallists Jamie Anderson (USA) and Sage Kotsenburg (USA).

Both US team riders will be accompanied by a strong armada from the hosting nation including the likes of Karly Shorr, Ty Walker, Jessika Jenson as well as Kyle Mack, Ryan Stassel, Eric Beauchemin, Eric Willet and Charles Guldemond.

Canadian's Max Parrot, Tyler Nicholson and Michael Ciccarelli as well as Billy Morgan (GBR), Mons Roysland (NOR) and Seppe Smits (BEL) are some of the men to watch out for and of course, up and coming NZ rider Carlos Garcia Knight! 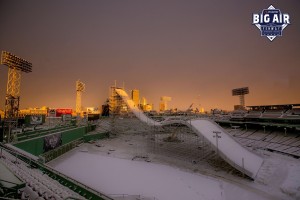