The NZ Paralympian is one of 12 invited riders and the field includes his main rivals from the World Cup circuit. USA riders Mike Shea and Keith Gable were fastest and second fastest qualifiers respectively.

Adaptive snowboarder cross made its exhibition debut at X Games in 2011 and was repeated at the 2012 event where Carl Murphy placed fourth. 2015 is the first year that the discipline has featured as a medal event and in its full format.

Today’s qualifying was a timed event with each rider having just one run. The times will determine seeding for tomorrow’s final which takes place at 9.30am NZT. Racers will compete head to head, six at a time.

Murphy will be looking to clean up his run and post a faster finals time by eliminating small mistakes made in today’s run. 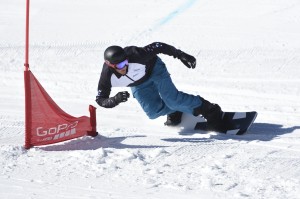