Paralympian Carl Murphy has firmly established himself as one of the best Para snowboarders in the world when he placed 5th in the Men’s Banked Slalom today in PyeongChang.

Murphy said: “I was pretty happy with how I pulled everything together in that last run and shaved almost two seconds off. My first two runs were a little disappointing. But at the end of the day there were faster guys out on the race course and all I can do is do my best and that is what I did today. I’m pretty happy with how I rode.”

He continued: “I’m sure my family were at home screaming at that last run. Their support – Aleisha, Oliver, Millie and Lukka – man I can’t wait to get home and give them some big hugs. I left it all out there for them so I’m sure my family are proud.”

Murphy started the day with a 52s flat in his first run of three in the Men’s Banked Slalom SB-LL2 event, which saw him sitting 5th fastest overall. After the first run there is only 1.8s between the top 6 riders and 6.96s separate the Top 10.

In the second run Murphy he carved 0.2s off to set a faster time of 51.8s. He remained in 5th place at the end of the second run of three, with one more opportunity to make it into a podium spot.

Murphy had it all to ride for in the third and final run where he smashed it posting a personal best for the day with a time of 50.21s. He threw everything he had at the last run, setting a time that was 1.6s faster than his second run and 1.8s faster than the first run. It was not enough for a podium however, with world no 1 Gurimu Narita (Japan) taking the gold after leading through all three runs. The silver went to Evan Strong (USA) and silver to Murphy’s nemesis from the Men’s Snowboard Cross quarter final on Monday, Matti Suur-Hamari (Finland). Only 2.75s divided the Top 6 in the end, with Murphy himself finishing 1.53s off the gold and 0.7s off bronze. This extraordinary effort from Murphy deserves every accolade, as he firmly established himself amongst the best Para snowboarders in the world.

This is the first time a New Zealander has ever won this Award and as acknowledgement of his outstanding achievement a 75 gram pure gold medal will be presented to Hall at the Closing ceremony on Sunday 18 March. This Award was first presented at the Seoul 1998 Paralympic Games.

The organisers said Hall was selected for his passion for giving back to the disabled community in New Zealand; encouraging and supporting people into Para sport so they can enjoy the same benefits he has and to ensure that the future of the Paralympic movement remains strong in New Zealand. It was also stated that Hall has not only given back to his country through his own sporting achievements, but also contributes to society as a whole.

Hall was represented by his wife Elitsa at today’s press conference who said: “The whole family is so excited for Adam. He has many family here supporting him at the Games. Truly Adam is who he is – that humble, down to earth, dairy farmer from Taieri. He really does believe in the Paralympic movement and the process of sport. This is just amazing for him, and New Zealand. We are just all so proud of him.”

She continued: “It is incredible that Adam is getting this recognition, not only for himself but also for New Zealand, all other Paralympians and the next generation coming through.” 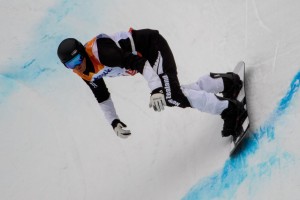