Lake Wanaka, New Zealand (8 October 2015) –The Salomon Ski Halfpipe and K2 Snowboard Freeride were the order of the day at the 2015 Cardrona NZ Junior Freeski and Snowboard National Championships today. Watch the video below:

Skiers across all age groups (Primary School Year 1 through to Secondary School Year 13) competed in the Olympic pipe which measures 22ft high, 21m wide and 160m long. The younger competitors (Primary Years 1-6) were the first to drop into the pipe and had two attempts to impress the judges with the technicality of their tricks, amplitude and overall style; the better of two runs counted as their overall score.

“The younger competitors came out charging and didn’t seem at all worried by the size of the pipe, it was good to see them competing on the big stage and with plenty of support from parents, friends and coaches cheering at the bottom of the pipe,” said judge Luke Hetzel.

In the Year 3-4 boys’ category Finley Melville Ives (Wanaka) impressed judges by gaining impressive height in the pipe and finishing his run off with a 540 spin. Gustav Legnavsky was another standout amongst the younger skiers, winning boys’ Primary Years 5 - 6 with a run which included back to back opposite way 540s, a technical switch 360 and a good variation of grabs on his straight airs and alley-oops.

While the Junior Nationals provide the ideal platform for New Zealand’s most promising young athletes to showcase their skills, the event also provides an opportunity for competitors to try their hand at a new discipline. Today’s competition saw several halfpipe ‘newbies’ in action, some even making it onto the podium.

Newcomer to the discipline, Margaux Hackett (France), who topped the Year 11-13 girls’ slopestyle class in Tuesday’s competition surprised even herself by gaining some impressive amplitude out of the pipe but maintained composure to land a solid run and first place in her age group.

“I’m pretty overwhelmed and really happy,” she explained after her run. “Slopestyle is my specialist discipline and I haven’t done that much halfpipe but I’ve really enjoyed it.”

Nico Porteous (Christchurch) and Finn Bilous (Wanaka) were the stand out performers in the halfpipe, claiming convincing wins in the Year 9-10 and Year 11-13 boys’ categories respectively. Opening the show with a switch 900, Nico signalled that there would be no holds barred. Keeping the speed on and the amplitude high, he span every which way and never missed a grab. While Finn stomped his run using a combination of old favourites and new progressive tricks including an alley-oop cork 360 with safety grab to finish.

With the snow softening as the day went on a safety call was made to finish competition after the first run for the older competitors (Years 7-13).

The snowboard freeride competition took place on the Tulips run on the lower left side of Captain’s basin. With overnight rain and cold temperatures making for icy conditions, start of competition was delayed until late morning to allow the snow to soften. This meant that competitors had just one run to earn a high score.

Head Judge Mike Hijgemann stressed that safety and control were the priorities of the day and judges would not be expecting to see aggressive tricks.

Cool Wakashima (Queenstown), competing in the Intermediate Year 7-8 girls group, had the unenviable task of opening the competition but put everything into her run, looked confident from top to bottom and managed to land a big air.

Confidence was also the name of the game for her brother who attempted one of the biggest rock drops of the day. Ryusei Wakashima showed no hesitation in his run in the Years 11-13 boys’ age group, heading straight for the 10ft plus drop. Points were deducted for the double bounce on landing but it was still enough to earn him a third place finish. Freeman Andrews won this age group with another big, but much cleaner, run starting switch through the top of the course.

The younger competitors (Primary Years 1-6) started on the rider’s right, a third of the way down of the course. They handled the conditions well and impressed judges with their well-controlled runs.

Year 3-4 boys’ competitor Rocco Jamieson (Wanaka) took a unique and creative line with good pace for a win in his age group. While Zephyr Lovelock (Auckland) and Valentino Guseli (Australia) pushed hard for a win in Year 5-6 boys, Zephyr coming away victorious with a run which incorporated the whole of the course and saw him blast from one feature to the next.

Video footage will be available through competition week.

The week’s competition will conclude with a prize giving ceremony at the Lake Wanaka Centre, Ardmore Street, Wanaka at 5pm on Saturday 10 October. Photos and footage will be shown of the Cardrona Junior Nationals event and the overall prizes will be awarded. 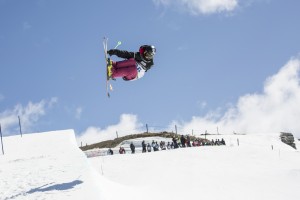