Aspen, USA (21 February 2015) – Cardrona NZ freeskier Byron Wells (Wanaka) has taken out first place in the halfpipe at the Aspen Snowmass Freeskiing Open in the U.S.A.

Competing in the same halfpipe used for X Games Aspen, the field of thirty five men battled through heavy snowfalls in the two run qualifying rounds with the top 10 then progressing to finals. Byron Wells qualified in second place with a well-executed, although, low-key run.

“It’s not how I’d normally ski and I was only getting about a quarter of the amplitude I was getting at X Games but the pipe was running really slow and no one was going big,” he explains.

With many years of halfpipe skiing and competition experience behind him the Kiwi knew that “today was about knowing how to ride in the slow pipe and being able to adapt to the conditions.”

Having erred on the side of caution to get through qualifying Byron Wells had none the less “come here to win” and it was time to step things up again come finals time. Run one of the two run final didn’t quite go as planned, however. Not quite spinning hard enough on the right nine meant a hand and backside touching the snow and points deducted.

Rather than big ticket tricks, the key to a winning score would be maintaining enough amplitude and speed to execute a tidy run.

“It wasn’t a day for pulling out all the tricks I can do but I wanted to put down a stand out run and make it easy for the judges,” says Byron. “I went for a combination I’ve never tried in competition before.”

Byron’s second run combo started out with a double 12, and with none of the other competitors opting for doubles, it was just what was needed to claim the top step on the podium. The run continued with a right nine, left 10, switch alley-oop five, switch seven, alley oop five.

The Aspen Snowmass Freeskiing Open is a gold level Association of Freeskiing Professionals (AFP) event and an International Ski Federation (FIS) NorAm. Competition began on Friday with slopestyle. Hamish McDougall (Wanaka) was the top placed New Zealander, finishing in eighth place. Byron Wells and Miguel Porteous (Christchurch) placed first and second in their qualifying heat but did not land runs in semi-finals and didn’t progress to finals. 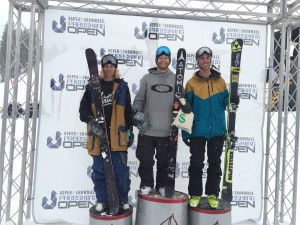