There’s nothing quite like a New Zealand summer. Long hot days spent enjoying the sunshine and hanging out at the lake. Sounds like fun, doesn’t it? From the perspective of a professional snowboarder who had her sights set on a northern hemisphere winter spent racking up valuable Olympic qualifying points – not so much.

Rebecca Sinclair – Bex – has a specific goal in mind: representing New Zealand in snowboard halfpipe at the Sochi Winter Olympic Games next year. Bex competed at the 2010 Vancouver Games and came away from the experience hugely motivated to train hard over the next few years and to try to podium in 2014 in Russia. While a knee injury in November 2012 – the very start of the northern hemisphere season – has significantly reduced the number of qualifying events she can attend, Bex has not given up on her goal. If anything she is more motivated than ever.

We talked to Bex from her home in Wanaka to find out what’s keeping her motivated while she recuperates from knee surgery and how she plans to get back on track in time for the Sochi Games.

Bex, tell us about your injury: how, when, where, what?

I ruptured the ACL ligament in my knee during my competition run in the Dew Tour last November. On my third hit in the halfpipe I came down a bit wrong on my Haakon (switch inverted 720), landing with my knee twisted inwards and felt it go. I knew what I had done (as I’ve done it before) and knew that it meant I was out for the season. Mum was watching the competition live online from back in New Zealand so the first thing I did was text her to let her know I was ok (ish)!

I managed to get in for surgery really quickly with a top American knee surgeon. He took a third of my patella tendon to make me a new ACL, and it’s about a six – nine month recovery. Rehab is made up of lots of physio exercises and gym work. Seeing my progression each day helps to keep me motivated – though it gets very tedious!

What goals have you set yourself for the next 12 months?

I will be ready to get back on snow late June, but will build up pretty slowly at first. Hopefully I can compete at the World Cup here in New Zealand this winter to gain some more Olympic qualifying points and then compete at the remaining few events (yet to be determined but likely to be in Europe and USA) to rack up enough points to get an Olympic spot.

How does it feel to be missing out on the northern hemisphere season?

It’s my first summer in a while so that kept me in good spirits, as well as knowing that this stuff happens and there’s not a lot to do but rehab well. BUT in saying that, it is hard with Facebook etc to see everyone posting about their training/riding/competing and knowing that I am missing out on some crucial results. On the other side of that, it is actually pretty cool watching the scoring live and getting nervous for everyone else!

Is qualifying for the Winter Olympic Games still on your personal agenda?

Yes I am still confident I can qualify if my rehab goes well and I can get back into riding without too many hiccups.

Have you had any doubts about this? You’ve already been to one Olympic Games, has there been any temptation since your injury to call it quits?

I haven’t doubted that I want to be competing in Russia (at the 2014 Winter Olympics) but it’s not under ideal circumstances now. It just means I will have to train that much harder when I get back on snow and hope that I don’t have any more injuries along the way. Having already been to an Olympics just helps me understand how great it is to be part of something so big, and so powerful. Last time was such an amazing experience, and I was so new to it all. This time around I hope I can get to the bottom of my competition run with nothing left to give and a sense of representing myself and New Zealand to the best I possibly can.

You’re also using rehab time as an opportunity to study. Can you tell us more about this.

I am doing a Bachelor of Science majoring in Psychology, extramurally through Massey University. Through sport I learnt a lot about brains and how they work, how we can maximise their potential – leading me to read a lot of neuroscience books. I think after snowboarding I want to work towards a career in neuropsychology.

You’re a top level sportsperson what’s it like trying to focus on study at the same time? If you were away competing as planned how would you balance the two?

I enjoy the structure of study and find it a really good break from the snowboard/sport side of things. I think it’s also crucial to have something else going on so that if I have an injury, whether minor or major, it’s easy to take a break for a while and have something else to focus on. Otherwise it would be an endless frustration as snowboarding has a pretty high injury rate!

How important is it for sportspeople to look beyond their sport for career options, do you believe?

I think it is vital, especially in extreme sports, because one day you can be on top of your game and the next you can be on the couch. It’s unpredictable and at least having other goals and plans can mean that there is a back-up if something happens.

Five years, either having podiumed at the 2018 Winter Olympics or be working towards becoming a neuropsychologist. 10 years... I am not even sure, seems like quite a while away!

Thanks for your time, Bex, and good luck! 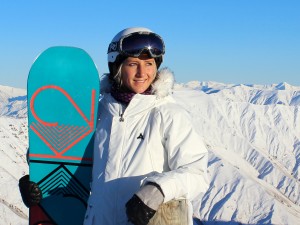