Kleine Scheidegg, Switzerland (13 February 2016) – Wanaka ski racer Ben Richards has won an inter-regional Giant Slalom in Switzerland, beating some of the home nation’s top skiers in the U16 age group.

High winds and fresh snowfall made for challenging conditions. After leading on the first run Ben had a nervous overnight wait following a decision to delay the second run to the following day to let the wind drop.

“I am really happy with the result in the weekend with the difficult conditions,” reported Ben. “I really went into the race aiming to ski my best and hopefully to finish in the top five as I hadn't raced a GS against the top guys in Switzerland so far this year.”

Ben took out the gold medal 0.98s ahead of Swiss skier Joel Lütolf who is the Swiss national U16 title holder for Super G and two-time national U16 Slalom champ.

Inter-regional races typically attract a high calibre of competition as five regions within Switzerland send their best athletes to compete. 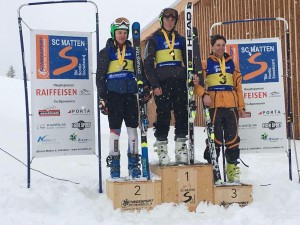