Back to Back World Champs Wins for Corey Peters

Panorama, Canada (5 March 2015) – Paralympic silver medallist Corey Peters is dominating the men’s sit-ski competition at the IPC Alpine Skiing World Championships in Canada, winning his second gold medal in as many days with the fastest time in today’s Super-G.

With a win in yesterday’s downhill to boost his confidence, Corey Peters hit the Super-G course at full noise and held nothing back. Attacking the course all the way to the finish, Peters found the perfect race line and never looked in doubt for a podium spot.

Carrying a huge amount of speed, his strong technical ability kept him right on track even when midway down the course he took air off a bump and flew sideways before recovering and continuing on with barely a flinch, to cross the line in 1:20.41.

With the Super-G course set on the same hill as yesterday’s downhill, racers had the advantage of familiarity with the terrain; however in this discipline the gates are set closer together and “the course comes at you much faster,” explains Peters. “Your reaction time has to be a lot quicker and after that mistake I didn’t think I had the lead.  The work I did at the top of the course really paid off.

“Wake me up when this dream is over!” says Corey, whose speciality is the Giant Slalom. “Who would have thought I would win gold medals in the downhill and Super-G when there are so many strong athletes here.”

New Zealand’s Adam Hall took a heavy fall in yesterday’s downhill and as a precautionary measure decided to sit out today’s Super-G to rest ahead of the Super Combined event scheduled for Sunday NZT.

A livestream will be available at www.Panorama2015.com alongside live results. Full schedule available here 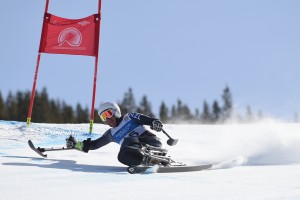