Adam Barwood sent this update: "We wrapped up the Copper Mountain race series yesterday after a good training block since arriving in the States. We've had cold mornings, around -15 degrees but warming for the second run. The two Super G days were good, more of a training tool for me but Willis did really well picking up third. I was happy with my skiing in the GS, I just needed to cut out a couple mistakes, then in the second race I got caught in some soft snow and didn't make it unfortunately."

Piera adds: "I'm really happy to have started my season off with some Super-G points in the bag and just narrowly missing the podium by a couple of tenths. Sights are now set on Panorama, Canada in a few days to begin the NORAM tour!"

The team now has a couple of days' training at Vail before heading north to Panorama, Canada to start the NorAm circuit.

Meanwhile, Eliza Grigg has been competing at National Junior races in Pfelders, Italy with her best result a ninth place in Giant Slalom.

Ski cross Jamie Prebble has an intensive month of racing ahead him on the Audi FIS Ski Cross World Cup Cross Alps Tour. Jamie will be competing in four different countries over the course of 15 days! He had a good warm up at the Europa Cup in Austria at the end of November, qualifying in third against a stacked field of world cup racers and finishing up 17th in finals. 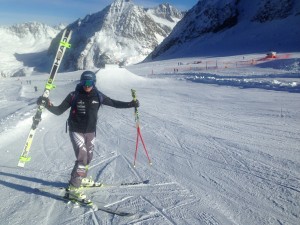