Lake Wanaka, NZ (3 May 2012) - The International Paralympic Committee (IPC) has made the exciting announcement today that two medal events for Para-snowboard will be included in Alpine Skiing Programme for the Sochi 2014 Paralympic Winter Games. This is the first time a Para-Snowboard event is to be included in the Paralympic Program and is fantastic news for New Zealand adaptive snowboarder Carl Murphy who is currently ranked second in the world.

“This is such good news for Para-Snowboarding as a whole,” said Snow Sports NZ’s Director of Coach and Sport Development and Carl Murphy’s coach, Adam Dooney. “I am most excited for our riders. Paralympics New Zealand (PNZ) could send at least two riders to this event and with Carl currently ranked second in the world, we have a real shot at gold for NZ.”

PNZ Chief Executive Officer Fiona Allan welcomed the news “We are really delighted that snowboarding has been included into the programme for Sochi 2014. This development is especially gratifying as New Zealand has such talent within this sport.”

Murphy was elated with the announcement, saying “This announcement means everything to me. It has been my lifelong dream to compete in the Paralympic Games and represent New Zealand at the highest level.”

Murphy believes he has what it takes to capture gold.

“I started competing five years ago and I am now number two in the world. I have no doubt I am capable of achieving Gold in 2014.”

“I know it’s going to be very tough with the high level of riders coming through the ranks, but I am confident with where I am now and will be working full steam ahead over the next 22 months to get myself into a position where I will be a realistic medal chance for the Sochi Games.”

Over the past six years New Zealand has been involved in the development and growth of this sport internationally to bring it to a Paralympic Level, for acceptance in the Paralympic Games. New Zealand representatives have been on the World Snowboard Federation (WSF) committee since the beginning and continued to work on the international scene to advocate for inclusion as a Paralympic sport. In 2009 New Zealand hosted the World Championships in Wanaka, and in 2011 World Cup at Winter Games NZ.

WSF Chairperson, Para-Snowboard Sport Technical Committee’s Danny Butain said, “It's an exciting day for everyone involved… it's been a huge team effort – a big thanks to New Zealand and Adaptive Snowsports NZ for their part in this! BIG thanks to Libby, Carl and Adam as well for all their hard work in making this happen!

“We have been pushing hard for a number of years to get our sport included in the Winter Paralympics,” said Murphy. “After getting rejected for the 2010 Games and then when the 2014 bid was also declined (so we thought) in August last year, all my hopes of going to the Paralympics pretty much disappeared.”

“This changes a lot for the future of the sport and the progression of Adaptive Snowboarding throughout the world.”

The first time you see the term, you might think para-snowboarding is some type of parachute driven snowboarding discipline. Actually, para snowboarding was formerly referred to as Adaptive Snowboard. The sport provides a competitive outlet for hundreds of athletes around the world with physical disabilities such as spinal injury, cerebral palsy, amputation, and visual impairments. Para-snowboarders compete based on their functional ability, allowing athletes with different disabilities to compete against each other. While the discipline is still in its infancy, its numbers are growing leaps and bounds. Its inclusion in the upcoming games will undoubtedly lead to even greater proliferation of the sport.

Paralympics New Zealand (PNZ) will be the official organisation selecting and sending athletes to the Paralympic Winter Games. Snow Sports NZ will work closely alongside PNZ to achieve this.

Qualification criteria for the Sochi 2014 Paralympic Winter Games will be published on Monday 28 May 2012. As we get closer to the next Winter Games and news of these new opportunities spread, more and more adaptive athletes will emerge to take their shot at winning a gold medal for their country. For further information, please visit www.sochi2014.com, and www.worldsnowboardfederation.org 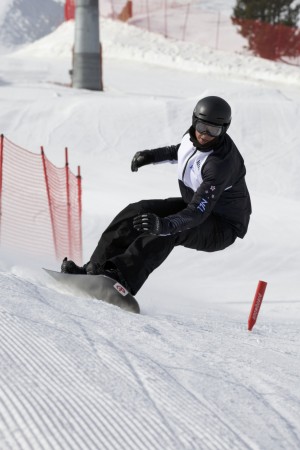