Warm temperatures overnight meant some soft snow conditions and Piera was happy to be the first racer on course.

“I got a lucky draw with bib one today with the soft conditions,” she said.

She made the most of this advantage, laying down the fastest first run in the women’s field, with all to play for in run two.

Defending national champion Alice Robinson moved up 15 places from bib 19 to finish fourth after run one and was happy enough with her performance.

“The course was really soft and bumpy,” she said. “My slalom isn’t my strongest event so I am really pleased to be in fourth after run one.”

In the men’s field, defending NZ champion Adam Barwood never looked in too much danger of relinquishing his title, so long as he could hold on in the tricky snow conditions. After the first run Adam was placed fifth with Willis Feasey the closest of his team mates but way back in 19th place.

As it was, a mistake in the bottom half of the course on run two would put an end to Willis Feasey’s second run charge for the men’s national championship title while Barwood hung on, dropping back to eighth overall but managing to retain the men’s Slalom title for another year.

“I had a lot of fun today, I knew I was fit coming into the race but I haven’t been training much slalom yet so didn’t have any expectations,” he said.

Leader after the first run, Piera Hudson started 30th in run two and had to battle the ruts to get to the finish. A few mistakes on the bumpy course cost her the overall lead, finishing in sixth place overall, but taking the National Ladies’ Slalom title.

Alice Robinson was charging the second run but a rut towards the bottom of the course put an end to her run and she DNF’d.

“I’m pretty disappointed with the mistake, but you live and learn,” she said.

Georgia Bushell finished ninth overall and Eliza Grigg in 13th to round out the NZ ladies’ podium. 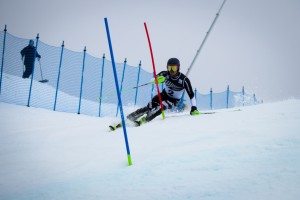