Today FIS released details about the design of the slopestyle course to be used during the 2014 Sochi Olympic Winter Games.

The details of the course have been highly anticipated as Ski and Snowboard slopestyle will be introduced for the first time as Olympic events in Sochi. The competition venue, which will stage a total of 20 Freestyle Skiing and Snowboard competitions, is located at the Rosa Khutor ski area.

Ski and Snowboard slopestyle is a judged event that integrates a variety of jib features (rails, boxes, etc.) and jumps (tables, big-airs, etc.) as athletes go down the course, with two or more lines that they may choose. The distance between the features should allow a smooth transition and performance. The ideal slopestyle course should be technically challenging, with a wide variety and balance of features in diverse combinations.

FIS Snowboard Coordinator for Freestyle Events, Roberto Moresi said of the course, “A team of experts worked with several groups in many meetings, and of course riders and skiers exchanged thoughts and ideas for what would work best to have spectacular events. We surveyed the best slopestyle courses, jumps rails sessions around the world collecting athlete’s comments and developed the final design that will provide a good flow and include a variable and creative jib section.”

The course in Rosa Khutor was designed by Anders Forsell, FIS Technical Advisor for slopestyle who has developed many previous courses for the FIS World Cup and World Championship, FIS Snowboard Coordinator for Freestyle Events, Roberto Moresi and Davide Cerato an expert in the field working for the Sochi 2014 Organising Committee. In close cooperation with Rosa Khutor every possible square meter of space was used.

“The design of the course was an example of great collaboration between the Sochi 2014 Organising Committee and FIS technical experts,” said Uwe Beier, FIS Snowboard Race Director. “We are looking forward to the first ever Olympic slopestyle competition. We are all glad that this fantastic and entertaining event was integrated into the Games programme. The final confirmation of including slopestyle into the Games only came two years ago, which meant that there was no time to lose in the design and building process. Everyone involved worked extremely hard to get to the point we are today and now we can all look forward to the construction process.”

The 635 meter course at Rosa Khutor features three jumps that get progressively bigger, allowing the athletes the chance to build momentum and execute their biggest and best jumps at the bottom of the course.

“It has been a long process to get to this point where we can release the slopestyle course,” said Joseph Fitzgerald, FIS Freestyle Skiing Coordinator. “Everyone, from the course designer to the Sochi 2014 Organising Committee and FIS experts are committed to providing the best-possible course for the Olympic debut. It is going to be a great introduction for this event, which goes back to the basic roots of freestyle skiing.”

There are 10 freestyle and 10 snowboarding events at the 2014 Olympics in Sochi being staged in two finish areas. In total, 12 competitions with four parallel events, four cross events and four slopestyle events, will all use the slopestyle course finish area. Slopestyle and the cross competitions will share the last landing, making it eight different competition days using the same feature.

Under the direction of Forsell, the course will be constructed by the Freestyle and Snowboard staff of the Russian Federation along with the support of the Rosa Khutor staff. An international field of expert groomers have been contracted specifically to build the different features. The finishing touches will be adding the Olympic look and feel to the course in addition to adding a Russian flare that is sure to give the course a spectacular visual effect. 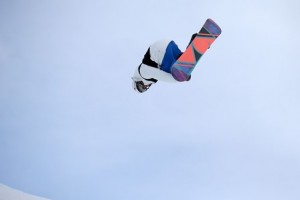