Using the new jam format, in which riders are ranked on overall impression rather than scored for individual runs, the eight finalists were able to complete four runs within the 35-minute competition window. The three rail, four jump course proved challenging with the entire field struggling to put down clean runs on their first attempt.

With a stumble on the second rail of her first run and then a crash on the first jump of the second, Zoi was sitting in eighth place midway through the competition. Finding her flow on run three, Zoi was able to link together a solid rail and jump line which improved her ranking to fourth.

Pushing to move up into a podium spot on her fourth and final run, Zoi went for a 1080 but couldn’t stick the landing and would finish the day in fifth place.

X Games competition wraps up tomorrow (Monday NZ) with Nico Porteous the last of the NZ contingent to compete, in the finals of the Great Clips Men’s Ski Superpipe. Nico claimed a bronze medal in this event last year. Competition will be broadcast on ESPN from 2.30pm NZT. 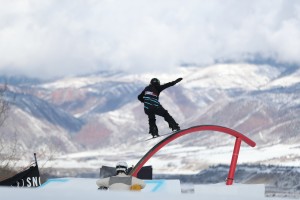