The event is the second in the International Ski Federation (FIS) ANC Series and is also sanctioned by the World Rookie Tour. For several competitors it is their first experience of FIS level competition, while at the other end of the spectrum, the top NZ and Australian competitors will be looking to win the ANC series in order to secure a place on the World Cup tour when the northern hemisphere season gets underway.

The men were first to drop in to the three rail, three jump course today, with two runs to put down their best score. Split across two heats the top six skiers and top eight snowboarders qualified to finals.

After securing wins in the Big Air ANC events at Perisher, Australia last week, NZ skiers Ben Barclay (Auckland) and Jackson Wells (Wanaka) were looking to back up with strong results in today’s competition; however, neither was able to put down a clean run and secure a place in the finals.

16-year-old Connor Addis (Auckland) finished sixth in heat one to claim his place. 13-year-old Finley Melville-Ives (Wanaka) put together a solid performance at his very first FIS competition to finish ninth in his heat.

Luca said he was “really happy” with his first run score of 80.00 but hadn’t quite landed the run he’d planned so was “super excited to up my score if I can land that run.” On run two he increased his score to 87.00 landing:

Switch on to the A frame to front four out, k-fed on down flat down, misty 450 off cannon rail, switch left 7 cork 7 safety, switch right dub 9 safety to japan double cork 1260.

The 10 female skiers competed together in one heat, with the top six making the cut for finals. 14-year-old Ruby secured her top score with her first run, scoring 80.00 with her run of:

She led the field at the end of the first run, only dropping back in to second place when the China’s Eileen Gu came through with 91.67 on run two.

In the snowboard field, Zephyr Lovelock (Auckland) just missed out on qualifying for finals, with his ninth-place result. Mitchell Davern was unable to find the form which saw him win the World Rookie Tour Slopestyle finals in Austria in March this year, finishing 11th in his heat.

Finals are scheduled for tomorrow (Friday) at Cardrona Alpine Resort. 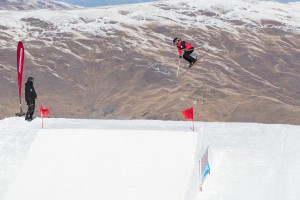