Kiwis on a Roll at The North Face Frontier 2*

The infamous Shadow Basin has once again proven itself as a springboard for progression during the first Freeride event of the North Face Frontier, as presented by QRC Winter Games NZ, fuelled by Forsyth Barr.

The  Ski Men category had a full stack of Kiwis on the ticket. Finn Bilous, usually unable to compete in the Freeride events due to a clash with Winter Games NZ Slopestyle and Big Air events, took out first place with 94.67 and said he’s “Stoked, this year to have the opportunity to get involved again, ending up on top is a dream come true!”

A beautifully executed top section, linked a sizable cliff into a huge floaty cork 7 off the money booter wind lip, followed by two more 360s - taking the last spin huge off the cliffs on the lookers left of the Hour Glass chute and stomping it clean.

Two years out of ski racing, Ben Richards has made a worthy entrance into the ranks of Kiwi freeriders and took out second place with a score of 91.33. Manu Barnard, another young gun fresh out of the Junior Tour and recently returning from injury placed third with 89.00.

In Men's Snowboard, 2019 Freeride Junior Tour overall winner, NZ's Ronan Thompson took out the win with 90.00 points. He had a belter of a run containing a big, tidy backflip in the top section and ending with a sizable cliff into a huge long jump off the hourglass cornice.

This is Ronan's first season competing in the adult division, where inversions are allowed. Coming from the no flip rule in the Junior tour, Ronan said he “definitely wanted to do a backflip” while going fast and pushing the number of drops he could do in a run. Timm Schröder from Germany grabbed second with 85.33 points and third place went to Liam Rivera with 81.67.

With a strong international field, The Frontier is well utilised as a practice event for high-level skiers and acts as an opportunity for newcomers to grab valuable FWQ series points, which will allow access into FWQ 3 and 4-star events for the upcoming Northern Hemisphere season.

One rider using the 2* as a practice event was Jess Hotter NZL, who has recently qualified for the Freeride World Tour. Jess took to the face with an aim to “try something new” before heading into her first season in the pro tour. Her run began with aggressive turns railed through high exposure, to show her ski racing roots, followed by a big backflip off the money booter wind lip - the first attempted by a woman on this venue - before unfortunately coming unstuck and crashing on landing.

In ski women, first place with a score of 84.00 was Jenna Keller of Switzerland, whose strong skiing through the technical section at the top of the venue and smooth linkage of features lead her into a large air through the lookers right side of the Breakfast Cliff band, stomped to the bolts. An amazing result for Jenna's debut event “First comp ever, so, how can you be more stoked than this!”. In second place was Jennie Symons with 81.00 points, followed by Sybille Blanjean of Switzerland in 3rd with 78.33 points.

The snowboard women opened the venue in style.  Spain’s, Nuria Castán Barón, who is on the warpath to qualify for the FWT rode into first place with 87.00 points and a strong run, starting off with two big top features on the lookers left of the venue and hammering it home with a massive long jump over rocks and tussock. Nuria already had entry into the FWQ 4* event and was using the 2* as a warm-up. “It’s good for me to train in these conditions and it will be good to do the same again in the 4*!” In second place was ex FWT rider Mikaela Hollsten from Finland with 75.00 points, Germany’s Claudia Bings finished 3rd with 70.00 point.

Also, in the mix this year were a number of young riders, recently graduated from the Freeride Junior Tour, among them in the Men's Freeskier were New Zealand’s Alistair Garland and Tenra Katsuno of Japan. Each taking to the face with their own unique styles and years of experience on many of the older riders.

With a stunner of a first event done and dusted, it is onto the second and final event of The North Face Frontier Freeride series, the FWQ 4* in the Alta chutes of the Remarkable on Monday 2 September. 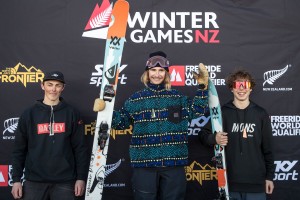