Cardrona, New Zealand (23 August 2019) – The first World Cup competition on the QRC Winter Games NZ, fuelled by Forsyth Barr programme got underway today at Cardrona Alpine Resort, one day earlier than originally scheduled. With strong winds in the forecast for the weekend a call was made to bringqualifying rounds in the FIS Snowboard World Cup Big Air forward and with today dawning clear and calm the decision proved to be a good one.

35 men and 15 women hit the Cardrona Big Air jump, each with two runs to put down their best trick and earn a top score. 10 men and six women would qualify through to finals; however, riders’ tactics would also allow for the possibility of finals being cancelled due to weather and final results taken from the qualifying rounds. It was game on right from the first jump with riders pulling out their biggest tricks.

In the men’s field Canada’s Nicolas Laframboise earned the top score of 86.25 with a frontside triple cork 1440 mute on his first run. The 19-year-old has previously won a North America Cup Big Air, in March this year, but his best World Cup result so far in this discipline has been 12th.

Japan’s Hiroaki Kunitake was only just behind with a score of 86.00 for his cab 1620 indy on run two. Lyon Farrell (USA) got a solid 83.75 with his first trick, a backside 1620 melon, which would see him through to finals in third place.

NZ's Mitchell Davern landed a 1260 on run one but knew he needed to step up to secure a top 10 spot and went for a 1620 on run two but couldn't quite stick the landing.

"I just wanted to try it, I've been wanting to try it for a while but I'm feeling pretty good about today," said Mitch.

Carlos Garcia Knight struggling to come back from an ankle injury, couldn't get the stomped tricks he was pushing for, not landing his first jump, and the landing a little sketchy on the second.

Finland’s Enni Rukajarvi (FIN) stomped back to back cab 720 mutes scoring 86.00 for each of her runs and taking out the top qualifying spot in the women’s field.

“I just wanted to feel good and do safety tricks,” said Enni, suggesting that she has plenty more in the trick bag for a finals competition. She is a World Cup silver and bronze medallist in Snowboard Big Air but is yet to claim gold.

NZ's Zoi Sadowski Synnott was looking to step up from a backside 700 on jump one to a backside 900 on jump two but found herself off axis and couldn’t execute the trick as planned. Her first run score of 78.25 was enough to put her through to finals in fifth, just behind Sarka Pancochova (CZE) in fourth. 2018 Winter Games NZ Big Air World Cup gold medallist Reira Iwabuchi (JPN) qualified in sixth place.

The timing for the finals of the FIS Snowboard World Cup Big Air presented by Cardrona Alpine Resort will be confirmed later today. 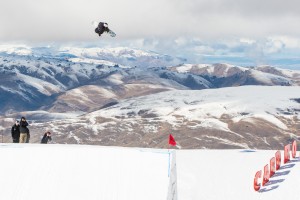