The rescheduled competition has coincided with the Snow Sports NZ Junior Freestyle Nationals, a long time favourite end of season event for junior athletes, with some making a difficult decision to miss Junior Nationals in order to focus on the open event which is sanctioned by the International Ski Federation (FIS) and attracted an international field.

“I’ve been doing the Junior Nationals since I was a nipper,” explains Gustav, who finished in third place in this morning’s competition. “It’s kind of part of my routine every year so it was a huge compromise to not do it this year. I had a bit of FOMO (fear of missing out) but I knew I needed to put my time and energy in to these two events. Today’s result paid off for me and I am beyond stoked to get my first podium at this level.”

Competition is scheduled to continue tomorrow (Saturday) at Cardrona with the NZ Showdown slopestyle event on the Big Bucks course. The competition is an open FIS event, and for snowboarders also has dual sanctioning from the World Rookie Tour. A strong contingent of New Zealand athletes, including many on the national development programme, will be in the start gates. 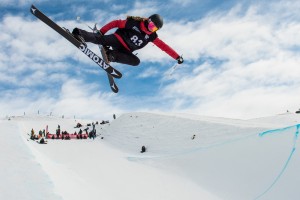