Four Freeski athletes have been selected to the New Zealand Team for the Lausanne 2020 Winter Youth Olympic Games.

For 17-year-old Ben Barclay, the goal to represent New Zealand at a major international event has been in place for more than a decade since he first took to the slopes of Mt Ruapehu on a family holiday and immediately fell in love with skiing.

“I’ve always loved skiing,” he says. “The freedom of being able to take your own route and add your own twist through your style, it’s such a fun sport to do.

From his very first competition at Auckland’s indoor Snowplanet, Ben has progressed from a standout age division athlete to consistently landing on the podium at international events.  With two first place finishes in Freeski Big Air and Slopestyle - including a win at this year’s Winter Games NZ - and one second place in Big Air, Ben was crowned overall winner of the 2019/20 Australia New Zealand Cup Series.

Wanaka-born and bred, 15-year-old Luca has been skiing almost as long as he’s been walking.

“I’ve always had the skiing gene in my blood because my dad was a pro mogul skier,” he explains. “I grew up skiing and then got massively into freestyle skiing when I got a bit older.”

Luca’s many hours on snow have allowed him to hone his skills across a full range of disciplines and at the Youth Olympic Games he will represent NZ in Freeski Halfpipe, Slopestyle and Big Air.

“Lausanne 2020 will be an amazing way to experience the Olympic scene. I’d love to make it to Beijing 2022 so this will be the perfect training ground,” he says.

After a fifth-place finish in Halfpipe at the 2018/19 Junior World Championships, third place in Slopestyle at the Winter Games NZ ANC and a win at the NZ Showdown FIS Slopestyle event this winter, Luca is looking forward to competing against the world’s best young freeskiers. He has been inspired by fellow Wanaka-local, Finn Bilous, who was the first New Zealander to medal at a Winter Youth Olympic Games.

“I really look up to Finn Bilous who went to the last Youth Olympic Games. He’s a good mate as well so it’s awesome to get to ski with him and learn off all the awesome stuff he’s doing.”

At just 14-years-old Ruby Andrews already has a Junior World Championship Freeski Halfpipe medal to her name and will be looking for top results in Lausanne.

“The feeling you get when you land a new trick or do well in a competition is amazing, there’s nothing else that gives me that feeling,” says Ruby. “If you know, you know!”

Currently training alongside the Snow Sports NZ High Performance Team in Europe, Ruby says, “It’ll be awesome to be in a team environment at the Youth Olympic Games with all the other New Zealand athletes. I’m really looking forward to it and can’t wait to get there.”

With the mountains as his backyard, “growing up in Arrowtown, I’ve been skiing since I could walk,” explains Max McDonald.

Starting out as a ski racer, Max soon found that he “loved jumping off things too so freestyle skiing is the perfect sport for me.” One of his career highlights so far has been winning the Alpine youth nationals and Freeski junior nationals in the same year.

Max is now looking forward to pushing himself against a strong international field. He plans to make the most of all aspects of the Youth Olympic Games and sees it as a valuable learning opportunity.

“I’m definitely looking forward to experiencing a new country and culture. It’ll be great as well to meet a bunch of athletes from around the world and hear about their sports and how they train.”

NZOC CEO Kereyn Smith extended her congratulations to the athletes.

“Well done to these athletes for all the work you’ve put in to make it to this point. We look forward to watching you compete in Europe in January.” 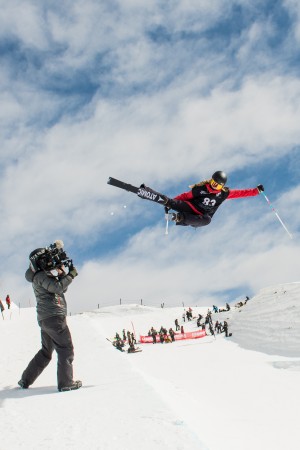