127 competitors dropped in to the 22ft high, 160m long superpipe with two chances to qualify through to the finals. In the Snowboard category, six women and 10 men would make the cut, and in Freeski, eight women and 10 men.

NZ rider Fletcher Craig put down two impressive runs, securing his place in finals with an 87.33 on his second run. Rakai Tait qualified through in eighth place. Zephyr Lovelock just missed the cut to finals, finishing in 12th, with Campbell Melville-Ives in 18th.

Just one point separated China’s Yiwei Zhang from Korea’s Kwang-Ki Lee (KOR) for the top spot in the Men’s Snowboard field, setting the stage for another close finals competition. Yiwei scored 92.33 with stomped back to back 1080s in his first run.

World number two Xuetong Cai led a strong contingent of Chinese riders in the Women’s Snowboard division, Xuetong earning the top qualifying score of 96.00 on her second run with clean back to back 720s. Five Chinese athletes qualified in the top six with Australia’s Emily Arthur also making the cut in fifth place.

The Women’s Freeski field saw a close battle between Russia’s Valeriya Demidova and China’s Eileen Gu. Eileen set the bar with a score of 93.00 on her first run, getting good amplitude out of the pipe and showcasing a variety of tricks. Valeriya pushed hard on her second run, upping her score from 89.33 to 93.66 and just edging into the top spot but Eileen was quick to answer, upping her trick difficulty and landing the biggest switch hit of the morning, a switch left 720, for a score of 95.00 and the lead.

Ruby Andrews was the top placed Kiwi in 16th place.  Anna Barugh finished 22nd. Chloe McMillan had a tough day at the office with a crash on her first run which put her back in 28th place but thankfully with no serious injury.

USA competitor Jaxin Hoerter’s first run score of 91.00 booked him a spot to finals at the top of the Men’s Freeski field. Robin Briguet (SUI) and Bingqiang Mao (CHN) were hot on his heals on 89.66 and 88.66 respectively.

Finals are scheduled to take place tomorrow (Wednesday) at Cardrona and will be live on Sky. 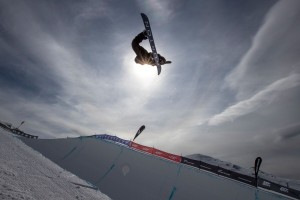