Alice Robinson and Willis Feasey Claim Back to Back National Titles

Defending 2018 NZ Women’s Slalom champion Piera Hudson look set to hold on to her title after a strong first run which put her in third place overall, 0.94s behind leader Tuva Norbye (NOR) and fastest of the NZ women. However, a crash on her second run put her out of the running, leaving the door open for Alice Robinson to claim her second national title for 2019 after Monday’s Giant Slalom win.

"I was reasonably happy with my first run sitting in third place but I wanted to move up those two spots on my second run and really go for it," explains Piera. "Unfortunately I crashed about half way down and was unable to finish but I’m happy with how I skied for the first slalom of the season and looking forward to the ANC’s next on the calendar."

“My first run was solid. I haven’t really been focusing on slalom, so I was happy just to put a decent run down. I was in a good position in the second run but unfortunately, I made a bit of a mistake which cost me, so I didn’t really ski how I wanted to.

“I’m happy I made it down and getting the title is good.”

In the men’s field Willis Feasey took a first run lead over NZ team mate Adam Barwood, moving from start bib 22 in to 20th place, and Adam further back in 22nd place. Colbey Derwin recorded the third fastest run one time of the NZ men, sitting in 32nd place from 73 racers.

Run two saw a change up in the placings with Adam recording a DNF. A last-minute bobble four gates from the finish almost put Willis out of the medals as well but he managed to hold on to claim his title, also his second for the week.

“The first run as alright but I wasn’t really hunting for the speed,” explains Willis. “Second run I thought I was looking to go a little faster, but I made a couple of mistakes and had to scramble at the end to make the rest of the gates but luckily I could move fast enough for that.

“It’s pretty good to win two titles this year. The GS was the main focus, that’s historically where I’ve been faster, and I was pretty lucky to come away with the Slalom one as well.” 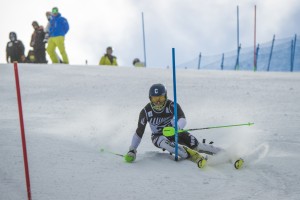