Paralympics New Zealand (PNZ) in partnership with the Attitude Awards have tonight announced Sophie Pascoe and Adam Hall as summer and winter Paralympians of the Decade. This is the first time this Award has been presented and acknowledges one summer and one winter New Zealand Paralympian who has leapt through their own hoops to help shape New Zealanders' attitudes to disability. This award celebrates the past 10 years of the Paralympic Movement in New Zealand, in what has been its most significant period of growth.

Fiona Allan (Chief Executive, PNZ) said: “We are thrilled to join with the Attitude Awards tonight to celebrate the impact the Paralympic Movement has had, driving social change in New Zealand through the achievements of all 209 New Zealand Paralympians. Sophie and Adam are two of our greatest Paralympians and sporting role models that clearly show all New Zealanders what can be achieved both at home and on the international stage through hard work, determination and resilience.”

She continued: “As a nation, New Zealand has long been associated with global sporting success. Sophie and Adam are exceptional examples of this. Collectively they have won a staggering 18 Paralympic medals and represented their country at 7 Paralympic Games.”

Paralympian Sophie Pascoe said: “It is such a huge honour to receive this Award. I would like to thank the incredible team of people that have supported me and been by my side throughout my career – my family, friends, my coach Roly, Paralympics New Zealand, HPSNZ, sponsors, managers, my support team. I am looking forward to another great year ahead in making New Zealand proud.”

Paralympian Adam Hall said: “This Award is so significant and acknowledges all the hard work and incredible achievements of so many Paralympians over the last 10 years. I feel privileged to receive this Award and see it as a celebration of where Para sport has come from and what lies ahead. I would like to thank Attitude for the amazing work they have also done over the last 10 years showcasing to the public that people with disabilities are capable of anything they put their minds too. Lastly, a huge thanks to all the individuals and organisations such as Snow Sports NZ, Paralympics New Zealand, HPSNZ and the NZ public for their ongoing support. And of course, my Dad, late Mum, sister and my lovely wife Elitsa and gorgeous little girl Gracelynn.”

Pascoe is New Zealand’s most decorated Paralympian and has the strength of character well beyond her years. She has cemented herself as a hugely influential role model in both New Zealand and across the globe. Pascoe has been an inspiration to many young people all over the world, but places heavy emphasis on the work she does in her local community. She spends time with school groups, women’s groups, corporate teams, community groups and disabled children, encouraging them to follow their dreams.

Pascoe’s story is well known of how she lost her left leg as a two-year-old in a lawnmower accident. She states: “Although our lives changed in that nanosecond, to this day I believe it is the best thing that ever happened to me.”

In the PyeongChang 2018 Paralympic Winter Games Hall was rewarded not only with 2 medals but also bestowed with an incredible honour when he was announced as winner of the Whang Yuon Dai Achievement Award. This is presented to only one male and one female Paralympian at each Games who best exemplify the spirit of the Paralympic Games and the Paralympic values.

As well as achieving world-class results, Hall volunteers his time to mentor up-and-coming athletes and to support the snow sports community. Diagnosed at birth with spina bifida – a disability that typically leaves people in a wheelchair – he maintains he is “lucky” because he can walk. Hall has demonstrated tenacity in overcoming obstacles in his life but never considered his disability to be one of these.

Hall’s work ethic is second to none and his positive attitude, even in the face of adversity, is inspiring to fellow athletes and all New Zealanders. 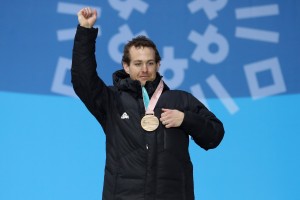