16-year-old snowboarder Zoi Sadowski-Synnott showed her class in the women’s snowboard big air qualifiers in PyeongChang today, stepping up to land a new trick and book her spot in Friday’s finals. She is the first female New Zealand snowboarder to qualify for an Olympic final.

The 26 competitors had two runs on the jump at the Alpensia Ski Jumping Centre. Zoi started seventh and stomped the landing on her first trick, a huge double wildcat, for a score of 72.75. Although happy to have a score on the board, the young Kiwi knew that she would need to take things to the next level if she was going to stay inside the top-12 and progress to finals.

“I was always going to do that first jump just to get one out of the way and have confidence coming in to the second one,” explains Zoi. “That’s my most consistent trick and only one other girl is doing it so I was hoping it would score high.”

By the end of run one she was sitting in 11th as the entire field pushed hard for top scores and threw down their biggest tricks.

“This is probably the heaviest comp that women’s big air has ever had,” says Zoi. “There’s never normally this many 9s (900s – two and a half rotations in the air) and 10s (1080s – 3 full rotations) all at once. I’ve never seen that before. It’s really cool to see that go down at the Olympics.”

Rather than being daunted by the pressure to improve her score, Zoi embraced the excitement of the event, knowing that she too had plenty more in the trick bag.

“It was a good vibe up there. Conditions were perfect and everyone was standing out so it gets everyone stoked,” she explains.

“I’d landed a few switch back 9s in training yesterday so I was always planning to step it up.”

On run two Zoi landed a switch backside 900, the first time she’d put down the trick in competition.

“I’ve never landed that trick before in a comp so I’m just over the moon and so, so happy to get a good score.” 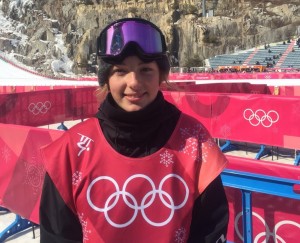