With sessions run at Cardrona Alpine Resort as well as the High Performance Sport NZ (HPSNZ) training centre in Wanaka, the camp focused on skill development and assessment of on and off snow capabilities.

The camp was funded by the Otago Community Trust (OCT), which has been a long term supporter of the Snow Sports NZ Sport Development Programme.

“This camp is vital for bringing the athletes together in order to set goals and build on mental skills as well as perfecting physical fundamental skills that enhance performance,” explains Snow Sports NZ Director of Athlete and Coach Development, Adam Dooney. ”Thanks to the financial support of OCT we were able to employ HPSNZ providers and leading snow sport coaches to deliver elite level education and coaching to accelerate athlete progression.”

A major aim of the camp was to instil a performance culture in the attendees by passing on valuable information and instigating learning across several different aspects of competitive sport.  The participants had set themselves various different goals including “wanting to improve my technique on jumps and skiing in general” to “learning how elite athletes make effective use of social media.”

“I want to take my sport to the professional level and Snow Sports NZ is the pathway into that world,” explains 14 year old Manu Barnard (Wanaka).

Manu and another camp attendee, Maggie Little (Wanaka) were able to put their new skills to immediate use, competing at the International Ski Federation (FIS) Australia New Zealand Cup at Cardrona on 25 and 26 July. For both athletes, this was the first time competing at a FIS level event.

“My skills with adjustment of speed and edgework helped massively in the variable conditions,” says Manu.

While Maggie said, “It was great to get back to basics. Being able to pop efficiently and carve properly. It was good to get those movement patterns right and it helped me to set my tricks and land solidly.”

A Talent Identification will be held for snowboarders during the 2016 season in New Zealand. 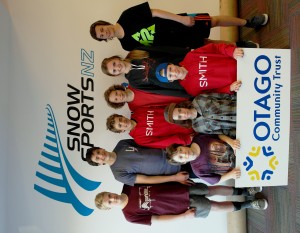