The Freeski World Cup Circuit kicked off overnight with the FIS Freeski Slopestyle World Cup in Stubai, Austria. NZ athletes Ben Barclay and Luca Harrington were both in the start gate after a nine month hiatus from World Cup competition.

Finishing up qualifiers ranked in 45th place Ben Barclay (Wanaka) explained that it was a “tough start to the season, but only up from here”. Luca Harrington (Wanaka) finished in 38th place in what was only his second time competing in a Slopestyle World Cup.

The athletes only got one training day (rather than the usual two days) due to a schedule change in response to the incoming winter weather in the forecast. “This was certainly a challenge and added a bit of pressure for getting runs dialled in and prepared. Of course the boys [Ben and Luca] got stuck in and put together some competitive runs” explained Snow Sports NZ coach Kerr McWilliam.

Both Ben and Luca landed their first runs but with room to improve and clean them up in the second run. The cloud rolled in midway through the second run, resulting in slightly diminished light which added to the challenge. Luca was unable to clean up his second run and although Ben improved his score, it was not enough for either athlete to advance to the finals

The top 16 men and top 8 women will be competing in the Stubai Freeski Slopestyle World Cup Finals on Saturday night (NZ Time). Live scoring will be available here. 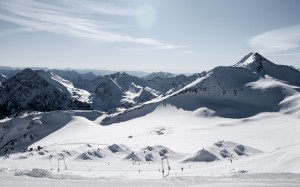