Cardrona, New Zealand (1 September 2018) – With heavy snow in the mountain weather forecast for the next few days, the FIS Junior Freestyle Ski and Snowboard Halfpipe World Championships Qualifying competition came down to a game of strategy. Competition was originally scheduled for tomorrow (Sunday) but was moved forward a day and the push was on today for spots in the 12-men, eight-women finals.

NZ’s Nico Porteous was leaving nothing to chance, knowing that under FIS rules for freeski, a qualifying result could count for a finals result should the weather put paid to a finals competition. He went big on his first run, taking a comfortable lead with a score of 92.2 but wanted to make absolutely-sure the top spot was his, stepping up with a left double 1260 in the middle of his second run and linking together switch tricks for a score of 95.6.

“I’m feeling good,” said Nico. “I was just making sure I’m safe. I like to qualify in the top spot just in case we don’t get a finals.”

Birk Ruud (NOR) opened his top scoring run with a double 1260 for a score of 91.00 and second place in men’s freeski qualifying.

With a 73.80 on his first run, Ben Harrington knew he would need to clean up his trick execution to be assured of his spot in the finals. He got the job done on his second run, going bigger and better to up his score to 80.40 taking him through to finals in sixth place.

US Snowboarder Toby Miller  opened his second run with back to back 1080s for a score of 95.60 and the top spot in the men’s snowboard qualifiers.

“Both my runs went great,” said Miller. “My first run I got a 90.80, the first run is the most nerve wracking one, you want to put down a score and make finals on that first run. I was very fortunate to do that, I’m stoked. I ended up bumping up (on run two) doing a cab double 10 after the frontside 1080 and doing three 10s instead of two. I just wanted to up the score a little more and use it as practice and get ready for finals.”

Fletcher Craig had a nervous wait, sitting on the 12th place bubble with a first run score of 66.60 and a crash on run two but in the end it was enough to carry him through.

China’s Lulu Jia nailed down the top qualifying spot in the women’s snowboard with an 85.6, spinning both ways with good amplitude out of the pipe and landing back to back 720s and back to back 540s.

Canada’s Elizabeth Hosking wasn’t too far behind with a score of 80.40, opening with a frontside underflip 720 and also incorporating back to back 540s in to her run, signaling her as another one to watch come finals day.

The Audi quattro Winter Games NZ events team will keep a close eye on the weather forecast before making a call this evening as to when the women’s freeski qualifiers and the overall finals competition will be held. In the meantime, The North Face Frontier 2* Freeride World Qualifier event at The Remarkables has been postponed until Monday due to the incoming storm. 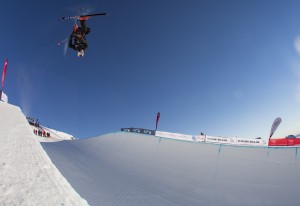