With a World Cup globe on the line and the competition also ranked at Platinum level by the Association of Freeskiing Professionals (AFP), the stakes were high and no one was holding back on the seven hit course.

Making the cut into the top 16 qualifiers for the World Cup final was the main goal for Wells and he just snuck in, finishing eighth in his heat yesterday.

With this goal met and faced with the heavy hitters of the sport as his competitors, Wells took his focus off a final result, concentrating instead on tidying up his tricks and putting down his own best run.

The young Kiwi is known for taking a unique and imaginative approach to the slopestyle course and the creative style of the Silvaplana park allowed him to play to his strengths.

The first run was a good warm up but the landings weren’t clean and Wells lost points for putting his hand down. Run two saw the ‘steeze’ (style with ease) that the judges were looking for, Wells stomping the right double nine and then the triple cork 1080 at the bottom of the course for a score of 83.60.

“That was really unexpected!” says Wells. “This is my first World Cup final and I didn’t really expect to get such a high score.” 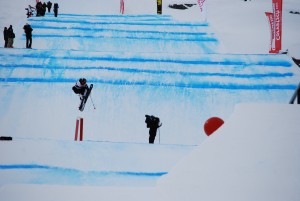